[vc_row][vc_column][vc_column_text]The 76th Annual Golden Globe Awards were announced on January 7, 2019 at the Beverly Hilton Hotel in Beverly Hills, California, the United States of America. These annual awards honour the best in Motion Pictures and Television for the year 2018.

This year’s event was hosted by actors Andy Samberg and Sandra Oh, who took over from 2018 host, comedian Seth Meyers. Oh joined a small group of actors who won an award in the same ceremony they hosted.

• The Globes this year pulled a twist at the end of the ceremony, with Green Book and Bohemian Rhapsody staging upset wins.

• While Green Book finished with three awards-the maximum for the evening, Bohemian Rhapsody- the Queen biopic and Alfonso Cuaron’s Roma won two each.

• Though “A Star Is Born” was the odds-on favourite for the Best Motion Picture (Drama), ‘Bohemian Rhapsody’ won the award. 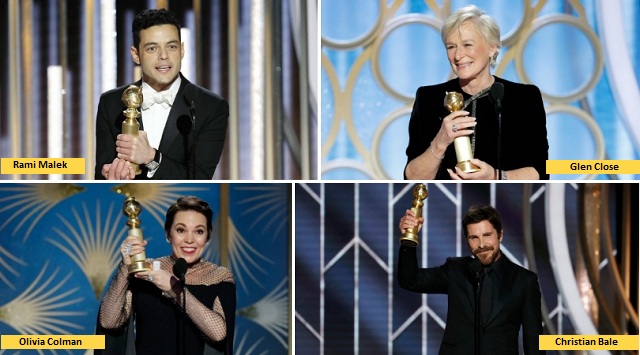